When quantity is better than quality 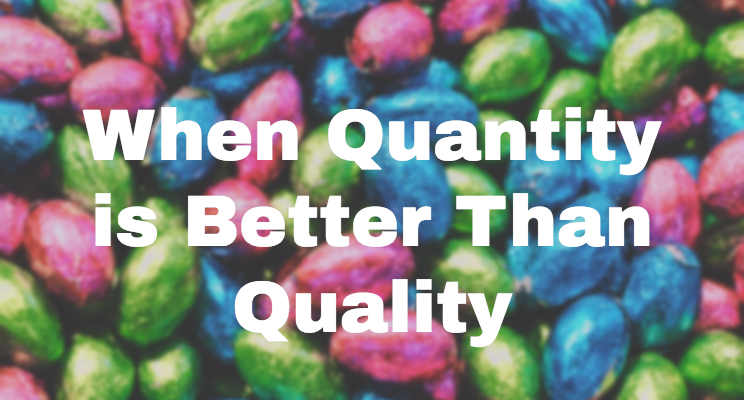 I believe that in many situations, quantity is more beneficial than quality.

About a year and a half ago, I wrote an article titled “Quality vs. Quantity – which should you focus on?“, where I questioned whether quantity or quality is more important in marketing and startups.

This argument clearly struck a chord, as that post received over 2,100 views, 419 Likes, and 103 comments on LinkedIn (the most ever for me, by far!).

I’ve been continuously thinking about that argument ever since I penned that article.

And while it may be controversial, I believe that quantity trumps quality in many situations. Hear me out.

The longer you stick with creating content, the more pieces of content you’ll create, and the more you’ll be on the top of your audience’s mind. If you only create a few pieces of long, great content, they may be successful for a little while, but you won’t engage your audience frequently enough to have a lasting impact.

For example, Gary Vaynerchuk is EVERYWHERE. He posts at least 6 or 7 pieces of content per day. His content is good, but I wouldn’t say that it’s of the  highest quality and production value, because that’s not what he’s going for. He documents – he doesn’t “create” – so he can crank out as many pieces of content as possible. And now he’s internet famous.

Venture capitalist Fred Wilson is similar. He writes everyday on his blog, and he does not always write good articles. He writes some solid, insightful pieces about startups, technology, and venture capital, but other times he writes about his vacations or just posts a link to a video. But he has written everyday for the past 14 years and thus has amassed a very large audience.

More customers is better than fewer customers who love your product.

Take EverPix, for example. EverPix was a beloved photo storage app which many called one of the best of its kind. Yet the company was only able to acquire 6,800 paying customers and died.

Wouldn’t you like to have more customers, some of which might be a pain in the ass, instead of fewer, perfect customers? Your revenue will be greater, your company will be larger, and you’ll make more money.

In Silicon Valley, venture capitalists fund entrepreneurs who are attacking large markets. And apps that have many users but little revenue and profit get funded (e.g. Snapchat in its early days) because VCs believe that if you build a large audience, you can eventually monetize that audience. I’m not saying this philosophy is correct nor is building a venture-scale business the only way to go, but it’s reality – scale and large markets get the dollars.

I can go on and on and name many other situations where quantity trumps quantity.

Here’s why I think this is.

Game of Thrones is an amazing TV show with a great plot, well-developed characters, and some of the highest production values ever. But some people still don’t like it.

I would not say that The Macarena was a good song. But it became one of the biggest one-hit wonders ever.

If you meet some minimum threshold of quality and consistently create, you will be able to find an audience that will like your work, because quality is subjective, and quantity isn’t.

Quantity can lead to quality

James Altucher preaches about thinking of 10 ideas everyday. Yeah, most of them will be crap, but out of those hundreds or thousands of ideas, there will be few that will be really good.

Your first few blog posts, podcast episodes, or videos will definitely be shit. But if you create (or document) every day, you’re going to learn very quickly about what it takes to improve and create awesome content. If you take two months to create that perfect video, you won’t learn fast enough.

The more customers you have, the more you can learn from them to improve your product or service, and faster.

Quantity can lead to quality, and that’s a powerful thing.

I’m sure I am going to get roasted.

But I do believe that quantity trumps quality in many scenarios.

Go ahead, roast away! I’d love to hear your thoughts in the comments.