That’s not the way you debate! My thoughts on the Presidential debates 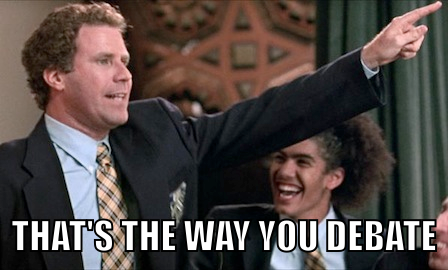 Yes, I watched the presidential debate instead of watching Monday Night Football, even though I had 3 guys on my fantasy team playing in that game. My team wound up winning. 🙂

I’m no wonk, and I didn’t fact-check, but here are my thoughts on what went down during the debate.

She was pretty much what we all expected. Very factual, very calm, and not at all inspiring.

We know she has the experience, we know she can get the job done, but is anyone excited about her becoming president?

It might not be fair to compare her to President Obama, who did an amazing job in moving the nation during his campaign.

But does anyone believe that Hillary can energize this country? This debate didn’t change that.

As much as his supporters say that he’s a straight shooter, he did nothing of the sort last night.

He deflected and avoided every tough question that came his way. His answer to the Obama birth certificate issue was horrible, and his thoughts on race relations and “law and order” were barely thoughts. He basically admitted he has avoided taxes and doesn’t have as much money as we think he does by not answering those questions directly. He talked about not allowing companies to go overseas yet didn’t elaborate on how. He really didn’t speak his mind because he knew that he would get chastised for it.

He interrupted Hillary Clinton many times and failed to respect the time limits and debate process.

Overall, he continued to show why he isn’t fit to lead this country.

I would have loved to be able to say “That’s the way you debate!” like Will Ferrell in Old School, but unfortunately this debate didn’t warrant it.

Can we get Gary Johnson in the next debate?

What are your thoughts on the debate? Talk to me in the comments!