A rookie’s first day at the International Consumer Electronics Show

More than 3,600 exhibitors. Over 38 football fields worth of exhibit space. 150,000+ attendees. The Consumer Electronics Show is massive, and all this happens right in the middle of the typical Vegas craziness.  I’m here to check out some cool products and do some networking. Here’s a recap of my first day on the scene.

The madness actually started a few months ago. Because I guest-blog for the CEA, I was able to acquire a Press pass to the show, and since September, I’ve been getting bombarded with 50-100 emails per day with requests from companies asking me to visit their booths and press releases about new product launches. It’s nice to feel wanted, especially when you’re a bush-league blogger like me, but it’s been a little insane. It was just a foreshadowing of what would happen here.

Furthermore, as soon as I touched down in Vegas, it was lines, lines, and more lines. I flew in on Monday night around midnight and the taxi line was 200 people deep. Even the check-in line at the Luxor had about 50 people on it at 1AM. Nuts.

The first session I attended was the conference’s opening keynote, where Ford presented the cool stuff that it’s doing to increase mobility around the world.  The Ford Innovate Mobility Series is a group of contests that reward innovative ideas that help solve transportation problems. Solutions like car sharing in India, parking apps in LA, and other creative answers to transportation and congestion were spawned from the program. But they couldn’t solve the traffic jam that happened right after their presentation: 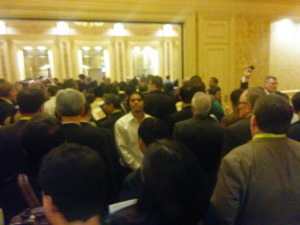 After the keynote, I walked through the exhibitor booths at the Sands Expo and saw a few cool products. Here are some highlights:

I continued to peruse the show floor and stumbled upon Fifty Cent promoting his SMS Audio products with Engadget:

I attended another session put on by CNET called “The Next Big Thing – New Realities,” which focused on how virtual reality and augmented reality are going to impact our lives soon. Right now, gaming is the most prevalent use of both VR and AR, but there are many use cases on the horizon that should catapult these technologies into the mainstream. I’ll definitely keep my eye on these technologies, as they can have a huge influence on our lives.

In the evening, I attended the Showstoppers event, which is kind of a mini-show within the overall CES conference. This event only had about 100 companies exhibiting and a large amount of media attendees, so it gave the companies a way to cut through the clutter and noise.

This was a really fun event. Not only was there was a nice spread and open bar, but the limited amount of companies and attendees and the intimacy of the venue allowed me to actually have real conversations with others and try a lot of the products on display. I’ll highlight some of the coolest products I interacted with in another post.

Overall, day 1 of CES was pretty crazy and full of crowds, sensory overload and glimpses into the future. I’m already exhausted but it’s been really fun so far. And there’s still two days to go!